Research is increasingly clear that stable, affordable housing is a critical driver of positive outcomes in many areas of life, but such housing is much less assured for the LGBTQ community.

Despite well-documented and consistent reports of discrimination against LGBTQ people in housing rentals and purchases, in the majority of states there are no explicit legal protections from bias on the basis of sexual orientation and gender identity in housing transactions. The patchwork of protections that do exist are primarily in cities and states where sexual and gender minorities experience more acceptance from their neighbors, yet even in these relatively more tolerant geographies, discrimination remains common.

“After conducting 2,009 paired tests in Dallas-Forth Worth, Los Angeles, and Washington DC, housing providers told gay men about one fewer available unit on every 4.2 tests than they told heterosexual men about, were slightly less likely to schedule an appointment with gay men, and quoted gay men average yearly rent costs that were $272 higher.  Additionally, providers told transgender testers about fewer rentals than they told cisgender testers, regardless of the protocol used (Urban Institute, 2017).”

Rates of discrimination are even more pronounced for LGBTQ people who also have other marginalized identities. Older LGBTQ couples, especially older lesbian couples, experience higher rates of poverty (9.1%) than older heterosexual couples (4.6%) (Center for American Progress, 2009). In addition, LGBTQ older adults face discrimination in the sale and rental of housing, and in mortgage lending, which adversely impacts access to housing.  One study found that 48% of older same sex couples applying for senior housing were subjected to discrimination (The Equal Rights Center, 2014). 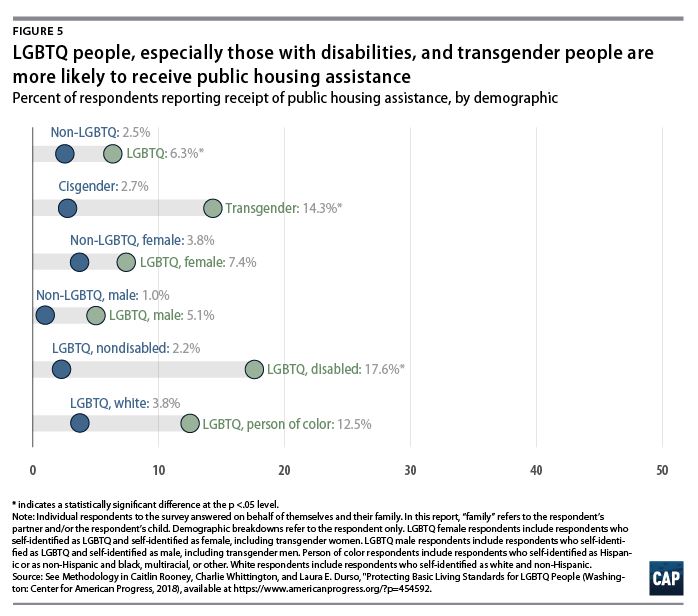 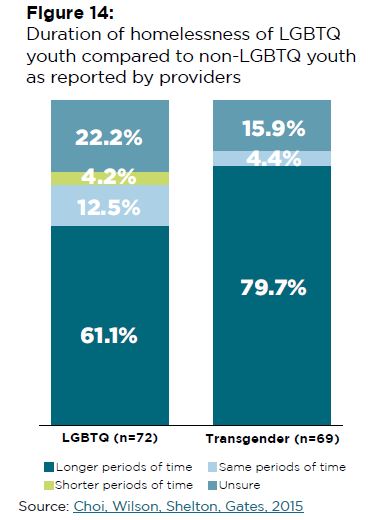 Given these consistently high rates of discrimination in housing access, it is no surprise that LGBTQ people are more likely to experience homelessness and housing instability than non-LGBTQ people.  While data on the adult LGBTQ population is scarce, we know that LGBTQ youth and young adults are 120% more likely than their heterosexual and cisgender peers to experience homelessness, which can significantly impede their economic mobility, educational achievement, and physical and mental health.  In fact, 40% of all homeless youth identify as LGBTQ. Nearly one-third of transgender and gender non-binary (TNB) people have experienced homelessness in their lifetime; rates of homelessness are even higher among TNB people who are also living with a disability or identify as people of color (True Colors United and the National LGBTQ Task Force, 2019).