PEOPLE with disabilities ARE OFTEN “priced out” of sTABLE, AFFORDABLE, ACCESSIBLE housing

“Nationally, the average rent for a modest one-bedroom rental unit was $861, equal to 113% of the national average monthly income of a one-person Supplemental Security Income (SSI) household. This finding confirms that in 2016 it was virtually impossible for a single adult receiving SSI to obtain decent and safe housing in their community without some type of rental assistance.” Quoted from Priced Out: The Housing Crisis for People with Disabilities

“In 21 states, discretionary state-funded SSI supplements provided additional monthly income to people with disabilities who were living independently in the community. Even with this additional income, SSI recipients in those 21 states were still unable to afford the rents charged for modestly priced units. State SSI supplements ranged from a high of $362 in Alaska to a low of $10 in Maine.”  Quoted from Priced Out: The Housing Crisis for People with Disabilities

“In 220 housing market areas across 40 states and the District of Columbia, one-bedroom rents exceeded 100% of monthly SSI.  Rents for modest units in 26 of these areas exceeded 150% of SSI.”  Quoted from Priced Out: The Housing Crisis for People with Disabilities

“Independent living philosophy emphasizes consumer control, the idea that people with disabilities are the best experts on their own needs, having crucial and valuable perspective to contribute and deserving of equal opportunity to decide how to live, work, and take part in their communities, particularly in reference to services that powerfully affect their day-to-day lives and access to independence.”

“Many apartment owners make direct comments refusing to make reasonable accommodations or modifications for people with disabilities so discrimination is easier to detect. Additionally, even though HUD has spent millions of dollars on the Fair Housing Accessibility FIRST program attempting to educate architects and builders about their fair housing responsibilities, developers continue to design and construct obviously inaccessible apartment buildings that do not meet the Fair Housing Act’s standards.” Quoted from National Fair Housing Alliance, 2012 Fair Housing Trends Report

IF PEOPLE WITH DISABILITIES CANNOT MANEUVER SAFELY IN THEIR HOMES, THEIR ABILITY TO PARTICIPATE IN THE COMMUNITY IS REDUCED 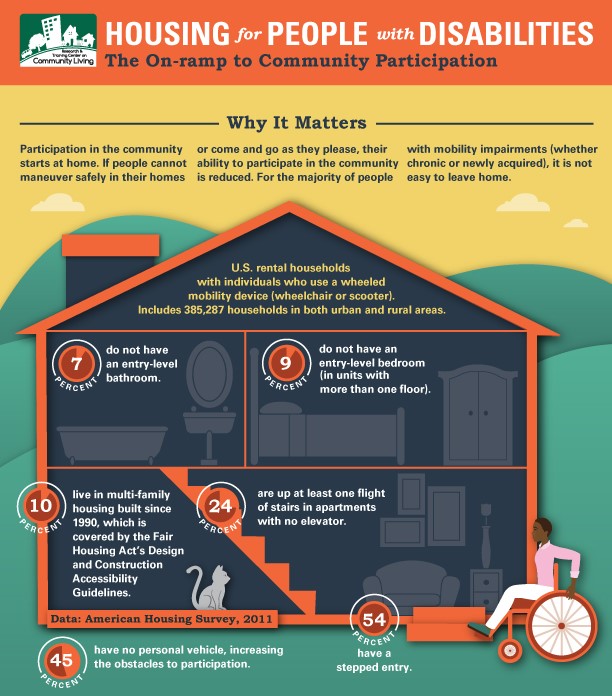 Source: The University of Kansas Research and Training Center on Independent Living