The Opportunity Starts at Home campaign held a multi-sector event on May 10 in Washington D.C. to officially introduce its “Opportunity Roundtable.” More than eighty individuals attended the event, including representatives from organizations representing education, healthcare, civil rights, anti-poverty, faith-based, veterans, homelessness, and other sectors.

The event opened with welcoming remarks from NLIHC President and CEO Diane Yentel, who stressed the critical timing of the campaign. “The affordable housing crisis has reached historic heights, most negatively impacting the lowest income people,” she said. “Despite the best efforts of those in the housing community across the country, the crisis is intensifying. At the same time, we have growing research that confirms how central housing affordability is to the outcomes of so many other sectors. It makes sense that leaders from other sectors are now joining us in our advocacy to advance federal policy solutions to make homes affordable for the lowest income people.”

Ms. Yentel’s opening remarks were followed by an informational presentation by Mike Koprowski, national campaign director of Opportunity Starts at Home.  Mr. Koprowski, in explaining the goals of the campaign, spoke to the importance of broadening the affordable housing movement and urged the audience to “re-think the silos we’ve created.” To continue expanding the movement, Mr. Koprowski invited the organizations in the audience to join the newly formed “Opportunity Roundtable.”

Following the opening presentations, five leaders from the campaign’s steering committee participated in a panel discussion on why their organizations joined the campaign and how housing intersects with their own fields of work. The panelists were Nan Roman, president and CEO of the National Alliance to End Homelessness; Harry Lawson, director of the human and civil rights department at the National Education Association; Richard Hooks Wayman, national executive director of the Children’s Defense Fund; Marvin Owens, senior director of the NAACP Economic Department; and Alice Dembner, director of substance use disorders and justice-involved populations at Community Catalyst. Diane Yentel moderated the panel.

Ms. Roman, in explaining the multi-sector approach, reiterated: “The goals we have for this campaign are ambitious. And you don’t achieve goals like these with one segment of the housing sector alone. It’s going to take a lot more ways of explaining the situation and the solutions.”

Mr. Lawson talked about the challenges of a multi-sector approach at the national level, particularly as they relate to the connection between housing and education: “Education policy tends to be just as complicated as housing policy. Talking about it in ways that are digestible and understandable is difficult, and it takes a real commitment to awareness and helping people understand the impacts.”

Despite these inherent challenges, Ms. Dembner reminded the audience that “if this isn’t a time for cross-sector engagement, I don’t know what is. Affordable housing can be the turn-key for a life of purpose.”

Mr. Wayman discussed a 2015 Children’s Defense Fund report about existing federal policies that could help reduce child poverty significantly and quickly. “We still have 13 million children living in deep poverty in America,” Mr. Wayman said. “So, the question we posed to ourselves was: What investments could we make in existing federal programs that could go to scale in reducing child poverty?  It was surprising to us as child advocates – because we weren’t steeped in this area for many years – that housing subsidies were the number one lift” in reducing child poverty.”

Mr. Owens summarized the overall spirit of the campaign and the panel’s conversation when he emphasized that “affordable housing gets framed in a bricks-and-mortar conversation. But it’s not just about buildings – it’s really about people and what impacts human beings.” 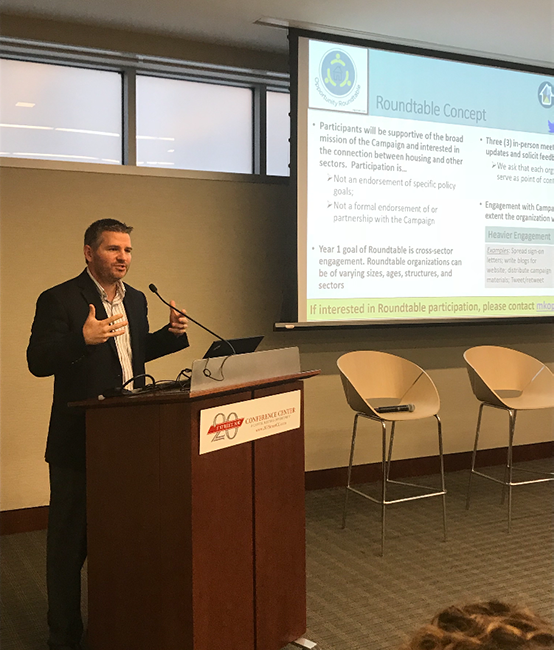 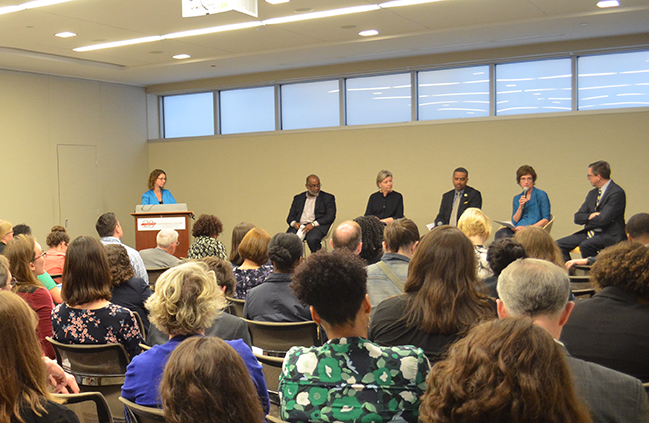 Attendees listen in to the panel discussion