CAMPAIGN’S STATEMENT ON THE INTRODUCTION OF THE EVICTION CRISIS ACT

Washington, DC – On December 12, 2019, Senators Michael Bennet (D-CO) and Rob Portman (R-OH), along with Sherrod Brown (D-OH) and Todd Young (R-IN), introduced the Eviction Crisis Act, which creates new tools to help end the nation’s continuing eviction epidemic.  Among various other promising provisions, the legislation includes the creation of an Emergency Assistance Fund to test, evaluate, and expand proven interventions to help low-income households facing housing instability due to an unexpected economic shock.  This policy solution was developed and championed by the Opportunity Starts at Home campaign, which worked closely with the bill’s sponsors.  The introduction of this legislation marks a significant milestone for the campaign in advancing its policy agenda.

The Emergency Assistance Fund is structured as a competitive grant program administered by the Department of Housing and Urban Development (HUD), with input from the Departments of Health and Human Services (HHS) and Agriculture (USDA).  Grants would be awarded to states and local governments to establish crisis assistance programs to prevent extremely low-income households from experiencing housing instability, including an imminent risk of eviction or homelessness, by providing short-term financial assistance and housing stabilization services.  At least three-fourths of the dollars must be used to provide direct financial assistance and up to one-fourth can be used to provide wrap-around services, such as counseling.  The bill also requires a rigorous evaluation of the program’s effectiveness in preventing housing instability.

Most families in poverty who rent spend at least half of their incomes on housing, leaving virtually no margin for an unexpected expense.  Broken-down cars, unreimbursed medical bills, or temporary declines of income can quickly send vulnerable households down the spiral of housing instability, eviction, and even homelessness.  If enacted, the Emergency Assistance Fund could provide a blueprint for helping millions of low-income households that live on the edge of what they can afford.

Leading national organizations from the housing, education, health, civil rights, anti-hunger, anti-poverty, criminal justice, child welfare, and faith-based sectors have come together through the Opportunity Starts at Home campaign to advocate for more robust and equitable federal housing policies.  Earlier this year, the campaign released its national policy agenda, “Within Reach,” which calls for a significant increase in rental assistance, a major expansion of the supply of deeply affordable housing, and emergency financial assistance to keep people in crisis stably housed. 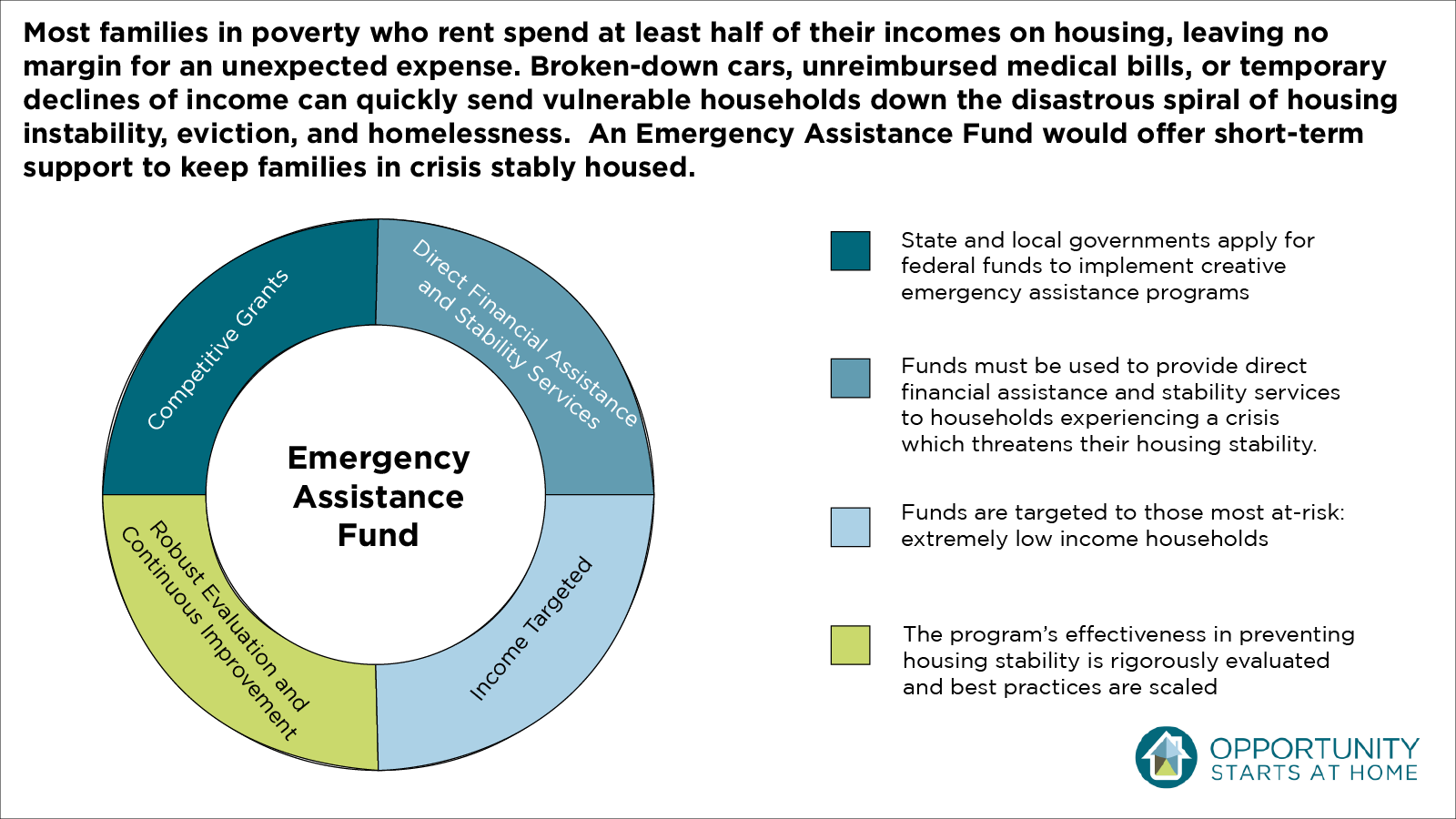 “Improving housing stability is not just about keeping people in their homes, but it’s also about providing them with the foundation they need for success in many other areas of life,” said Mike Koprowski, National Director of the Opportunity Starts at Home campaign.  “Stable, affordable homes are linked with better educational outcomes, better health outcomes across the lifespan, greater food security, upward economic mobility, and reduced costs to the taxpayer.”

“I applaud Senators Bennet, Portman, Brown, and Young for their leadership in introducing legislation to create new tools to help end America’s ongoing eviction epidemic, which most severely impacts the lowest-income seniors, people with disabilities, families with children, and other individuals,” said Diane Yentel, President and CEO of the National Low Income Housing Coalition.  “If enacted, the Eviction Crisis Act would create a new Emergency Assistance Fund to extend an emergency cushion to families in crisis.  Together with the legislation’s new data collection and outreach initiatives, the bill would help low income renters avert the downward spiral of housing instability and homelessness. I urge Congress to quickly pass this bill.”

“As an educator who has taught at a homeless shelter, I know—as do NEA members across the nation—how important it is for children to have a home of their own,” said Lily Eskelsen Garcia, President of the National Education Association (NEA).  “Home is a child’s universe. Students in stable homes are able to concentrate better, and without the burden of adult worries, they are free to learn, be curious about the world, and dream. Educators want all students to have that experience, and that’s why NEA members applaud Senators Bennet, Portman, Brown, and Young for introducing the Eviction Crisis Act, which will help families facing desperate circumstances.”

“The Emergency Assistance Fund will not only keep families stable in their homes, but will also promote health,” said Dr. Megan Sandel, Co-Lead Principal Investigator for Children’s HealthWatch and pediatrician at Boston Medical Center.  “For many of my patient’s families, a housing crisis that threatens their health and well-being is one missed paycheck or one unexpected expense away.  This bill is an innovative solution for ensuring that families are protected from economic shocks and the children and their families are able to remain healthy in their homes.”

“Every day, people become homeless who not long ago had a stable home, but whose lives and housing were disrupted by an economic crisis that a small amount of money could have fixed,” said Nan Roman, President and CEO of the National Alliance to End Homelessness. “Thanks to Senators Bennet, Portman, Brown, and Young for this legislation that would make such help available, preventing housing instability and homelessness and improving the lives of struggling Americans.”

“America’s cities, towns, and villages are on the front lines of the affordable housing crisis, and local leaders are eager to support bold solutions like the Eviction Crisis Act,” said Clarence E. Anthony, CEO and Executive Director of the National League of Cities (NLC).  “This legislation would give local governments an opportunity to address a host of social and economic challenges at the root level, including by providing grants to mitigate housing instability and limit costly evictions.  NLC commends Senators Bennet, Portman, Brown, and Young for introducing this bill; and for their ongoing bipartisan leadership, which is so sorely needed today.”

“Eviction from one’s home is a horrible trauma from the decimation of a family’s shelter to the destruction of its financial security,” said Hilary O. Shelton, Director of the NAACP Washington Bureau and the Senior Vice President for Policy and Advocacy.  “The NAACP salutes and supports the efforts of Senators Bennet, Portman, Brown, and Young to thoughtfully and effectively address this serious, and sadly continuing, problem. The provisions of this legislation which create an Emergency Assistance Fund to help extremely low income American families facing eviction is an incredibly important tool in our arsenal to fight the scourge of homelessness. The Emergency Assistance Fund, as envisioned by this legislation, is perhaps one of the best examples of a ‘safety net’ that I can think of that the government can, and should, pursue for all Americans during the hardest economic times in their lives.”

“As providers of health care to more than 28 million low-income Americans, Community Health Centers know very well the close link between housing instability and poor health,” said Tom Van Coverden, President and CEO of the National Association of Community Health Centers. “For this reason, we strongly support the inclusion of an Emergency Assistance Fund in the Eviction Crisis Act, and we applaud Senators Bennet, Portman, Brown, and Young for their leadership in introducing this vital legislation.”

“JustLeadershipUSA joined the Opportunity Starts at Home campaign because we know how crucial it is for people and communities that have been impacted by the criminal legal system to have real access to safe, affordable housing,” said DeAnna Hoskins, President and CEO of JustLeadershipUSA.  “It’s just as crucial to ensure that people who need help maintaining that housing can get the help they need. The Emergency Assistance Fund contained in the Eviction Crisis Act of 2019 goes a long way toward providing that sense of security and stability, and it does so without leaving anyone out or excluding anyone from the support it offers. This is crucial – the issues we’re fighting for transcend any one area and speak to the larger cause of economic and racial justice. We can only achieve those goals if the reforms we pass to get there help everyone and protect everyone’s access to basic human needs such as housing.”

“On behalf of the members of the National Association of Social Workers (NASW), the nation’s largest professional social work organization, I want to offer my full support for the passage of the Eviction Crisis Act,” said Dr. Angelo McClain, CEO of the National Association of Social Workers.  “I also thank Senators Bennet, Portman, Brown, and Young for joining in a bipartisan collaboration to address one of the country’s most important social problems.  Social workers, as direct providers of services to indigent and low-income families, are all too aware of how financial distress can create a housing crisis which often leads to homelessness. The Emergency Assistance Fund will help state and local governments to develop innovative programs that will lead to housing stability for low-income families.  You can be assured that NASW will join with other Opportunities Start at Home partners to help get this bill passed.”

“Too often, families on the verge of eviction are simultaneously struggling with hunger,” said Jim Weill, President of the Food Research & Action Center.  “The Emergency Assistance Fund will not only keep a family housed, but also increase a family’s food security by stabilizing the situation and avoiding the multiple harms to nutrition, health and well-being emanating from an eviction. No one should be faced with choosing between, much less experiencing, a cascading loss of, housing, food, and other basic necessities.”

“The Coalition on Homelessness & Housing in Ohio (COHHIO) enthusiastically endorses the Eviction Crisis Act and the creation of the Emergency Assistance Fund designed to prevent unnecessary evictions,” said Bill Faith, Executive Director of COHHIO and state partner of the Opportunity Starts at Home campaign.  “Evictions in many Ohio cities are hitting record levels as housing costs are growing increasingly out of reach especially for those with the lowest incomes.  We all now understand that evictions are not only the result of – but also a cause of – deeper poverty leading to increasing homelessness.  This legislation has the promise of helping to reverse that tide.  We appreciate the leadership of Senators Portman, Brown, Bennet, and Young working together to tackle this stubborn problem.”

To read the full text of the legislation, click here.

To read the press release from Senators Bennet and Portman, click here.

To read the NYT article about the bill, click here.