Washington, DC – Today, the Opportunity Starts at Home campaign released the results of a national opinion poll revealing that the public is deeply concerned about the housing affordability crisis and favors decisive government action.  The Tarrance Group, one of the most widely respected Republican strategic research and polling firms in the nation, conducted the poll on behalf of the campaign and found that nearly 9 in 10 (89%) respondents – including 76% of Republicans – believe the role of government is important when it comes to making sure there is enough affordable housing. Strong bipartisan majorities favor a variety of policies designed to address housing affordability and stability, such as:

Such strong support for policy changes is underscored by a widespread recognition of the severity of the housing crisis, with many respondents indicating it has affected them personally. In fact, 60% of respondents – including 52% of those living in rural areas – said that housing affordability is a problem where they live. A similar number (59%) of respondents said that the amount they pay for housing was a concern, with the heaviest burdens falling on individuals with low incomes, African-Americans, Hispanics, and renters (36%). To make matters worse, 2 in 3 (67%) respondents believe that the average cost of rent in the area where they live will increase in the next year, with only 2% expecting a decline. Nearly half (49%) of the public reports that they have had to make at least one sacrifice since the beginning of the coronavirus outbreak to make sure they can pay their rent or mortgage, such as cutting back on healthy food, stopping retirement savings, using a credit card, and skipping medical treatments to help cover all or some of their housing costs. 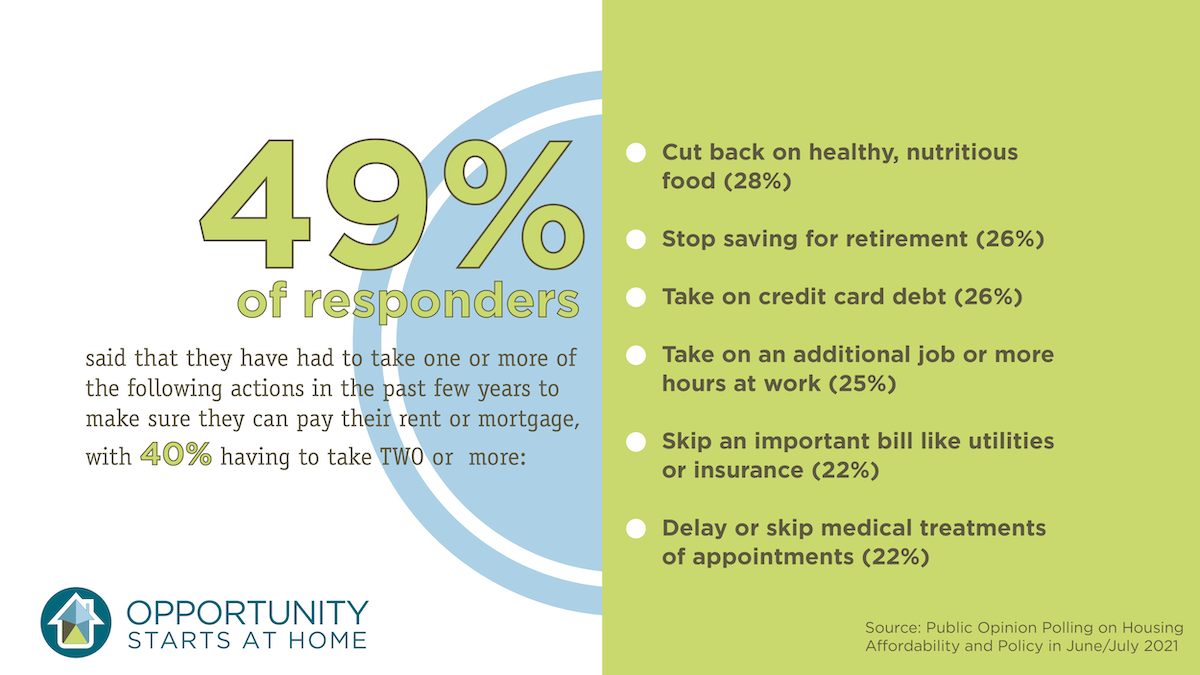 The vast majority of the American people expect action from elected officials, regardless of their political affiliation. Nearly 9 in 10 (89%) respondents – including 79% of Republicans – said that it was important to them personally that their elected officials work to make sure there is enough affordable housing available. Indeed, 82% of respondents believe that the United States should be doing more to prevent homelessness and 74% believe that making sure everyone has a safe, decent, affordable place to live should be a top national priority. Furthermore, 61% believe the President should take executive action to make housing more affordable for low-income people, including nearly half (49%) of Republicans. Respondents also want to see policymakers work across the aisle to address these challenges, with 45% of respondents said they would be more likely to support a proposal if it had bipartisan support, including 42% of Republicans and 54% of Democrats.

Importantly, respondents want to see action taken to address the housing crisis even in the face of hard trade-offs. A substantially larger portion (1.5x) of respondents said that the government should make major investments related to safe and affordable housing – even if it meant a national debt increase – compared to those who said that limiting the debt should be prioritized. Roughly 6 in 10 (59%) respondents agreed that investing in federal housing programs is so important that we should consider things like raising taxes on corporations and the wealthy or cutting spending in other areas – 2.5 times the number of people (23%) who disagreed.