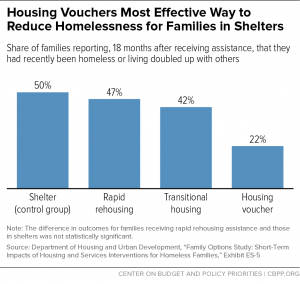 “Extensive research demonstrates that housing subsidies solve homelessness for the majority of families…The continuing crisis in affordable housing has led to a situation in which all too many poor families have become homeless. Many of these parents came of age when housing costs were high, and they were never able to break into the housing market.  Others have lost housing and cannot find a new home that they can afford.  For the vast majority of families, affordable housing, typically secured with a voucher or other subsidy, is sufficient to assure housing stability (Shinn, 2009).”

“Approximately 150,000 unaccompanied youth and young adults between the ages of 18 and 24 experience an episode of homelessness each year. However, resources to serve them fall far short of demand. As a result, approximately 15,000 youth were found to be unsheltered (sleeping on the streets, in abandoned buildings, tents, cars, or other places not meant for human habitation) on a single night in January 2015, and many more likely went undetected.

“Other studies have repeatedly found that families leaving homeless shelters for subsidized housing live in safer and higher quality communities and are less likely to return to a shelter than families who did not receive housing assistance (Rog, Holupka, & Patton, 2007) (Shinn, Weitzman, et al., 1998) (Shinn, 2009).”

Quoted from NLIHC, A Place to Call Home.

“At a fundamental level, the homeless have higher premature mortality than those who are appropriately housed, with injuries, unintentional overdose, and extreme weather events being important drivers of this mortality. The homeless also have poor quality of life, characterized, as noted in various studies, by chronic pain associated with poor sleeping conditions and limited access to medications and other salutary resources” (Baggett et al., 2013) (Hwang et al., 2011). Quoted from Boston University, 2016