Investments in affordable housing are a proven catalyst for economic growth, job creation, and development.

According to a literature review by The Center for Housing Policy, the creation of affordable housing increases employment (direct jobs such as construction and indirect jobs such as suppliers and materials); increases revenue for local government (permits, fees, property taxes, sales tax); and increases consumer spending in the area once the home are occupied (retail, grocery, etc.). (Center for Housing Policy, 2011; National Association of Home Builders, 2015).

“HUD programs boost local economies, supporting hundreds of thousands of jobs each year. The Campaign for Housing and Community Development Funding (CHCDF) estimates that in FY2015, HUD investments supported 537,297 jobs.  Of those jobs, 301,217 were directly supported by HUD programs, while 236,080 were supported indirectly.”

According to the Center for Community Change, every dollar invested in city housing trust funds leverages an average of $6.50 in public and private funds.

An analysis by CivicEconomics and HousingWorks Austin looked at the economic effect of the City of Austin’s 2006 affordable housing bonds.  They found that the initial $55 million in bonds brought $865 million to the local economy. 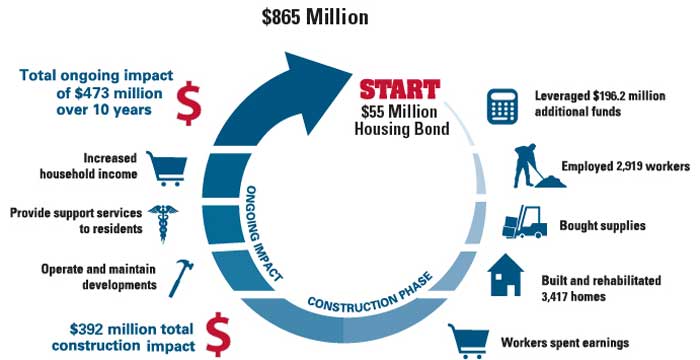 “A recent study found that the shortage of affordable housing in major metropolitan areas costs the American economy about $2 trillion a year in lower wages and productivity. The lack of affordable housing acts as a barrier to entry, preventing lower income households from moving to communities with more economic opportunities. Without the burden of higher housing costs, these families would be better able to move to areas with growing local economies where their wages and employment prospects may improve.”

“Researchers estimate that the growth in GDP between 1964 and 2009 would have been 13.5% higher if families had better access to affordable housing. This would have led to a $1.7 trillion increase in total income, or $8,775 in additional wages per worker.  The lack of affordable housing prevents lower income households from moving to communities with more economic opportunities and makes it difficult for businesses to attract and retain the workers they need.”